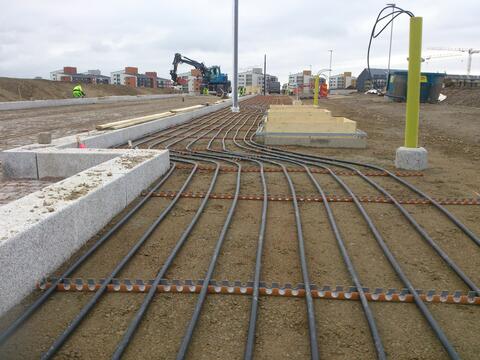 The new district of Brunnshög in the city of Lund will be home to the world’s largest LTDH network (low-temperature district heating). The heating network is based almost entirely on fossil-free surplus heat recovered from MAX IV, another of Lund’s many innovative facilities. The city of Lund has close to 120,000 inhabitants and is growing fast. Lund is perhaps best known for its university, and a large percentage of the population is made of students and researchers. The city is also home to the MAX IV research facilities, essentially a radiation-based microscope, and the European Spallation Source (ESS), a new joint European particle accelerator.

Lund’s strength in research and development means there is a lot of activity in demonstrating and testing the latest solutions in range of fields, not least in the new city district of Brunnshög, which has been built right next to the research facilities. By 2060 , when Brunnshög has been fully developed, about 40,000 people will live and work here. Ambitions are exceptionally high; besides the aim to host the world’s best research and innovation environment, the district will be a showcase for sustainable urban development.

<h2> Technology with numerous benefits </h2>
The supply temperature in the LTDH network is 65 degrees Celsius, much lower than the average temperature of about 90 degrees in traditional district heating systems. The reduced supply temperature has several benefits; it makes heat production more efficient, reduces heat loss, and means distribution pipes can be made from plastic instead of steel. An economic side-effect is that Brunnshög’s district heating customers can have a lower district heating tariff than with traditional solutions. The return temperature is quite low, at 35°, which is a measure of the system’s efficiency in making most of the heat ‘stay’ in the buildings.

<h2> Using heat for new applications </h2>
Besides developing, demonstrating and evaluating optimised heat production and distribution technologies, the Brunnshög LTDH project offers the opportunity to develop new business models and test exciting new applications. In addition to heating homes, the surplus heat and the low-temperature network can be used for things that don’t normally use this kind of heat source. For example, it will be used to heat the ground at Brunnshög’s tram stops in the winter to prevent the build-up of snow and ice. Other applications and technologies are being investigated by the EU-funded COOL DH innovation project.

<h2> Based on surplus heat </h2>
The LTDH network in Lund was built by Kraftringen, Lund’s energy and utility company. The new network is based almost entirely on fossil-free surplus heat recovered from the MAX IV facility. The network started delivering heat in 2019 to Möllegården at Brunnshög’s Science Village, and will continue to expand in step with the growth of Brunnshög, eventually covering about 100 hectares.