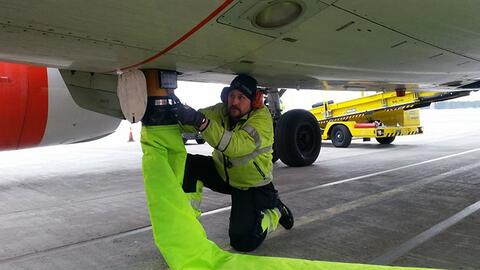 Luleå Airport is one of two pilot sites testing a new way to heavily reduce the carbon emissions. By using the district heating and cooling system for parked aircrafts, the airport’s electricity demand has dropped by 95 %. To supply the terminal building with energy, many airports have their own heating/cooling plant or are connected to a waterborne heating/cooling network. But what if the heating system could be connected to the airplanes as well, providing the energy needed to keep the aircraft warm and ventilated while they are parked?

This climate smart solution enables the airport to release electric power for other areas where electricity cannot be replaced by other energy forms, which leads to better utilisation of energy resources. It also opens up to a reduction of carbon emissions related to the aircraft maintenance.

<h2> How it works </h2>
The air conditioning units are used to keep the aircraft warm and ventilated when parked on the ground, to avoid the risk of sensitive systems freezing and to have a comfortable temperature in the cabin for the crew and passengers when boarding. At Luleå Airport, the planes’ air conditioning systems were powered with electricity units. They are now replaced with units connected to the district heating system. The units are mounted underneath the boarding bridges and the air is transported through a new unique, insulated duct to the aircraft. The duct is lightweight and flexible which makes it easy to handle and folds in a crate for storage between uses.

<h2> Energy from waste heat </h2>
Last but not least, the district heating in Luleå uses waste heat from the steel company SSAB, which means that instead of going to waste by being let out in the environment, the excess heat is utilised to warm up buildings, homes – and now also aircraft!