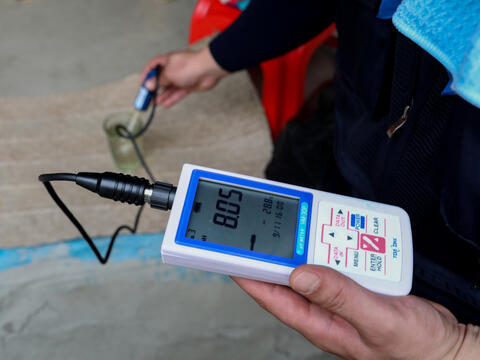 After securing funding from the Green Climate Fund, SONEDE is planning to overhaul efficiency in its network with smart water network technologies.

Tunisia is looking to radically overhaul the energy footprint of its national water utility after kicking off a development finance-backed efficiency programme. The Green Climate Fund has approved a request for technical assistance from the Société Nationale d’Exploitation et de Distribution des Eaux (Sonede) for the implementation of a smart water network pilot in the Sousse-Monastir area.

The scheme will help Sonede reduce water consumption, non-revenue water and energy consumption in the region. It will also inform Sonede’s strategy to implement and finance a national smart water system. Technical assistance will be provided by the Climate Technology Centre and Network (CTCN), a body set up by the Conference of Parties (COP) and hosted by the United Nations Environment Programme (UNEP).

Khaled Zaabar, SONEDE's director for energy management, told GWI that the area had been selected because – with the 50,000m3/d Sousse seawater desalination plant coming online next year – it presents an ideal test bed for all the challenges the utility faces. Desalination is seen as expensive but essential for Tunisia to increase its resilience in the face of growing water scarcity. The utility is therefore keen not to waste a drop and to encourage responsible consumption.

“We want to manage supply and demand,” he said. “We want to be transparent with our customers, especially large consumers like hotels or manufacturers, and introduce new billing systems to help us manage peaks in demand. If we manage to save water, we will save energy.”

Energy is a major burden for Sonede: it is the largest individual consumer of electricity in the country, and energy currently accounts for 24% of the cost of water for the utility. With several seawater desalination plants due to come online over the next decade, this could rise to 35% by 2030. “The whole consumption of Sonede is currently 500GWh a year, but Djerba [a 50,000m3/d SWRO desalination plant] on its own is 40GWh and we have 200,000m3/d of desalination capacity coming online in the next two to three years,” he said. “Our average energy consumption for water from transfers and brackish water desalination is 0.6kWh/m3, whereas for seawater desalination, it is 3kWh/m3.” What has compounded desalination’s energy intensity is the high cost of electricity, which has increased four-fold in 25 years, while water tariffs have failed to keep up.

Renewable energy and desalination in Tunisia

Tunisia is planning a raft of renewable energy projects to mitigate the impact of forthcoming seawater desalination plants on its energy consumption.

In order to rein in energy spending, Sonede wants to bring energy down to 17% of its water cost by 2030. The utility plans to achieve this by improving energy efficiency by 15%, which is where smart networks come in: hydraulic modelling and smart metering will help Sonede optimise water production and distribution management. The company is also working on the rehabilitation of older infrastructure, while energy-efficient designs for new infrastructure and equipment are now standard practice.

In parallel, it plans to increase its renewable energy supply from just 0.2MW at present until it accounts for 30% of the total used. Zaabar explained that the legislation now makes it possible for Sonede to produce its own renewable energy, but also to sell excess back to the grid, and to transfer energy from one site to another. This is especially useful, since suitable renewable energy production sites are not always located next to the big energy consumption hubs.

Zaabar said that SONEDE had mapped its renewable energy potential and found that it has a solar photovoltaic (PV) potential of 78MW, as well as 5MW of small and micro-hydropower within its drinking water networks (turbines can be installed at the head of reservoirs or in the distribution network itself, where they can act as pressure regulators).

To implement this will cost €120 million, and the utility thinks it will recoup the investment in three to six years. It has already applied to German development bank KfW for funding for a 10MWc solar PV plant in Zaarat, where a 50,000m3/d SWRO desalination plant (built by VA Tech Wabag) is due to come online in late 2021 or early 2022.

The article can be found here.

More about the CTCN project in Tunisia here.