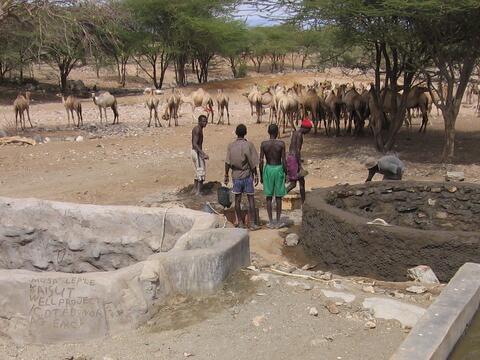 The United Nations Framework Convention on Climate Change (UNFCCC) is an international environmental treaty negotiated at the Earth Summit in Rio de Janeiro from 3 to14 June 1992, then entered into force on 21 March 1994. The UNFCCC objective is to “stabilize greenhouse gas concentrations in the atmosphere at a level that would prevent dangerous anthropogenic interference with the climate system”.

Conference of the Parties (COP22) was held in Marrakech, in the North-African country of Morocco, from 7 to 18 November 2016. A focal issue of COP22 is that of water scarcity, water cleanliness and water-related sustainability, a major problem in the developing world, including many African states. Prior to the event, a special initiative on water was presided by Charafat Afailal, Morocco’s minister in charge of water and Aziz Mekouar, COP22 ambassador for multilateral negotiations. The global framework for action seeks to catalyse international cooperation on water scarcity in agriculture in the context of climate change and growing competition for water resources.

It is a call for partners from different fields and backgrounds to join in a concerted effort to support countries in implementing their intended nationally determined contributions related to agriculture and water; and in achieving the food security and water related targets of the 2030 agenda for sustainable development.

The intended nationally determined contributions (INDCs) strongly point at agriculture and water in coping with climate change. Ninety-four percent of the 188 countries that submitted INDCs, as of March 2016, included agricultural sectors and 80 percent included water in their mitigation and/or adaptation plans.

Of the 130 countries that include an adaptation section, 77 percent specify measures for managing water scarcity and protecting water quality.

Global forums and international organisations have been listing water scarcity as a top priority risk, as a major constraint to socio-economic development of nations, a growing problem for businesses, and a threat to growth and stability on a global scale.

Agriculture holds the key to coping with water scarcity, as it is responsible for 70 percent of all fresh water withdrawals. According to the World Health Organisation, “Over 1 billion people globally lack access to safe drinking water, 2.6 billion lack adequate sanitation; diseases related to unsafe water, sanitation and hygiene result in an estimated 1.7 million deaths every year.” There is a growing recognition today, mainly expressed by non-governmental that countries and businesses are acting with short-term financial interests as their goal and paying lip-service to the long-term consequences on the environment and water conservation. In effect, a disregard to their impacts which are generating water challenges.

The economic theory, tragedy of the commons, helps to identify how the earth is reaching a tipping point for water scarcity; when no one individual, business or association has entitlements to a resource, it leads to over exploitation because preservation is not in the user’s interests.

Africa, as can be seen in the ‘Deaths from unsafe water, sanitation and hygiene’ there is an average of 500-1 050 death per million resulting from polluted water due to agriculture, industrial processes, mining and urbanisation.

Deforestation, an example of tragedy of the commons, does not only negatively impact trees, but the forests entire micro-climate, resulting in a range of negative consequences. Forests initiate a hydraulic cycle, allowing evaporation and transpiration of water into and from the atmosphere.

Through deforestation this cycle is lost, causing the ground to flood and through degradation of the soil contaminate water supplies, making it unfit for human consumption.

Soil degradation results in a vicious cycle of major seasonal flooding, further exacerbating soil erosion with consequential deaths, reduced land fertility and loss of properties. Water and climate change are inextricably linked, as a lot of the technologies required to tackle climate change require an accessible source of water.

By harmonising water and climate policies, it will help to streamline the whole environmental system.

In addition, by increasing water conservation this will reduce the need for infrastructure to be erected for expensive desalination facilities across the world. In order to extend water access in Africa, water governance for issues such as deforestation and urbanisation will require tackling at the source of the issue. Consequently, resulting in a larger impact on the economy of the country through the reduction of money necessary to be spent on health care for water pollution related illnesses.

The Namibian Government in collaboration with the Climate Technology Centre Network (CTCN) and the Council for Scientific and Industrial Research will jointly address water scarcity in Namibia.

The CTCN is the operational arm of the UNFCCC Technology Mechanism and is hosted by United Nations Environmental Programme in collaboration with the United Nations Industrial Development Organisation (UNIDO).

The Minister of Environment and Tourism, Pohamba Shifeta said studies have shown that water availability in Namibia will diminish under a changed climate. In this regard, a decrease in run-off and the reduction in groundwater recharge are expected by the year 2020, which thus puts the country in an absolute water scarcity dilemma. In view of this worsening trend, there is a great need for the exploration of sustainable alternative sources of potable water for both human consumption and economic activities in order to address this acute water problem, he noted. Namibia is a semi-arid country and is vulnerable to harsh climate conditions. Furthermore, the lack of readily available water in the interior of the country poses a serious threat to water availability in the country and is limiting the country’s prospects for economic growth.

Food and Agriculture Organisation (FAO) and its partners have agreed to join forces in order to assist member states cope with the impacts of water scarcity in agricultural sectors and along the value chain.

The meeting was intended to bring together the initial partners of the Global Framework for Action and discuss the aspects of governance, the priorities for their portfolio and the next steps.

Both current and future partners and beneficiaries were welcome. The Paris agreement recognizes the “fundamental priority of safeguarding food security and ending hunger, and the particular vulnerabilities of food production systems to the adverse impacts of climate change”.

It also recognizes the importance of harnessing climate action to drive sustainable development – something the agricultural sectors are uniquely positioned to do. As part of the global climate action agenda, the agriculture and food security action event discussed the central role of agriculture in solving the triple threat of hunger, poverty and climate change.

Three new and inter-related initiatives were launched: The “Triple A” – Agriculture Adaptation in Africa, promoted by the Kingdom of Morocco; a Global Framework for action on water scarcity in agriculture, launched by FAO, and Milan Urban Food Policy Pact, signed by 132 cities around the world. These initiatives aim to make the agriculture sectors more productive, sustainable and climate resilient; and to step up agriculture action in the Paris Agreement. Their action will directly contribute to more sustainable use of natural resources and to promote sustainable agriculture, a major step to address land degradation.

There is a long way to go before the water scarcity problems are solved across the globe, however collaborative projects such as COP22 and the UN’s Sustainable Development Goal for sustainable management of water and sanitation, are a huge step in the direction of water conservation for all.

*Dr Moses Amweelo is a former Swapo Parliamentarian and the former Minister of Works.