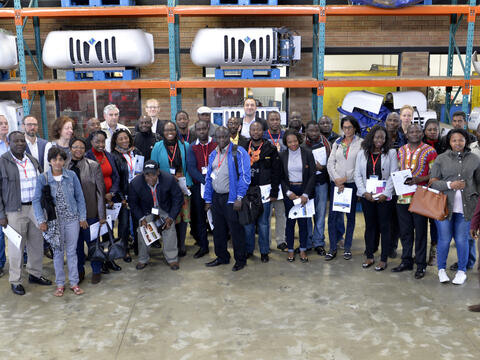 Due  to  low  efficiency  levels  and  high  leakage  rates  of  refrigerant  gases  with  high  global  warming  potential  (GWP),  the  refrigeration  and  air-conditioning  (RAC)  sector  is  responsible  for  a  significant  share  of  global greenhouse gas (GHG) emissions, and this share is expected to rise to 30% by 2030. Especially  in Africa, the  rapidly expanding middle class and changing lifestyles translate into growing demand for refrigeration and air-conditioning. In order to mitigate both direct and indirect emissions from the cooling sector, the introduction and diffusion of green cooling technologies is of paramount importance.

The organizers acknowledge that exchange between technology suppliers and end-users, as well as between industry and public institutions, is important for the promotion of green cooling technologies. Consequently, around forty stakeholders, comprising national ozone officers, climate change focal points, industry representatives of twelve African countries were invited and joined the four-day event.

Within the framework of the Green Cooling Africa Initiative (GCAI), CTCN and BMUB support four African partner countries (Ghana, Kenya, Mauritius and Namibia). Seven delegates from those countries, working in the ozone and climate departments of their home ministries, were among the participants engaged in a vivid exchange on how to further the goal of transformational change in the cooling sector via sped up technology transfer and implementation of sectoral RAC NAMAs.

During the event, CTCN and its activities, as well as the Green Cooling Africa Initiative, were introduced. Presentations by the CTCN consortium partner ‘Council for Scientific and Industrial Research’, as well as by representatives of the four CTCN-GCAI partner countries, spurred great interest among the participants.