CTCN Engagement at the 56th Sessions of the UNFCCC Subsidiary Bodies

CTCN Engagement at the 56th Sessions of the UNFCCC Subsidiary Bodies 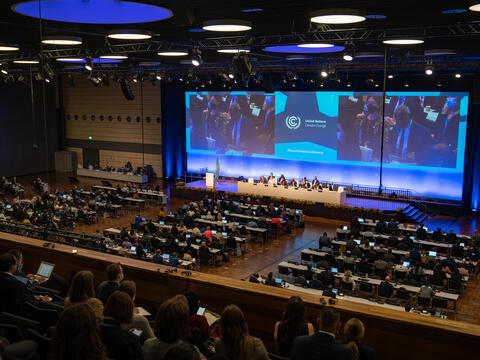 The 56th Sessions of the UNFCCC Subsidiary Bodies took place from 6 - 16 June 2022, in Bonn, Germany - the first in-person SBs since the beginning of the COVID pandemic. Several new dialogues were introduced based on processes initiated at COP 26 in 2021, including the Glasgow–Sharm el-Sheikh work programme on the global goal on adaptation, the Glasgow Dialogue on loss and damage, the new collective quantified goal on climate finance, and an annual Ocean Dialogue.

It was a very busy and productive series of meetings and events for the CTCN, and an excellent opportunity to engage with a multitude of Parties, organizations, and agencies about ongoing and future collaboration and the development of the CTCN’s Third Programme of Work (PoW) under development for 2023-2027. The CTCN also followed the discussion of the three main technology-related negotiation tracks, which focused on linkages between the Technology Mechanism and the Finance Mechanism, the Technology Mechanism Periodic Assessment, and the Poznan strategic programme on technology transfer.

The CTCN held meetings and discussions with a broad range of stakeholders over the course of the sessions with numerous countries and country groups to request input on technology priorities for the 3rd Programme of Work (PoW) 2023-2027, currently under development and which will be launched this fall. The CTCN and Technology Executive Committee (TEC) organized a meeting with 30 National Designated Entities to share progress on the development of the PoW, to seek further input, and to provide them with an opportunity to ask questions and share priorities for their countries. Meetings were also held with representatives of several Central Asian countries to discuss the CTCN’s potential support to enable technology innovation in the region. The CTCN also met with representatives from the Republic of Korea to discuss the upcoming PoW and the launch of the Partnership and Liasion Office in July in Songdo, Korea.

Additionally, the CTCN met with the Egyptian COP27 presidency to discuss the launch of the PoW, as well as the European Union, G-77 and China, U.S. Department of State, and other major groups including the Least Developed Countries (LDCs) and Alliance of Small Island Developing States. Several bilateral meetings were held with countries regarding upcoming requests for CTCN technical assistance. Meetings were also held with the UNFCCC Secretariat, as well as the Financial Mechanism and financial constituted bodies, including the Green Climate Fund and Adaptation Fund, under which the Adaptation Fund for Climate Innovation Accelerator (AFCIA) Programme is currently launching its 3rd call for applications.

The CTCN Advisory Board chairs participated in a meeting with co-chairs of the ad hoc work programme on the new collective quantified goal (NCQG) on climate finance for 2022, Italy and Trinidad and Tobago, and representatives of constituted bodies under the Convention and the Paris Agreement with the aim to explore synergies with the NCQG.

Lastly, the CTCN met with UNFCCC Constituency groups, including the Business NGO constituency group, and the Women and Gender Constituency to discuss areas of collaboration and the PoW. The CTCN participated in the Local Communities and Indigenous Peoples Platform’s (LCIPP) workshop on “Respectfully engaging with local communities and indigenous peoples through human-rights-based engagement: examples from national and regional climate policymaking,” which aimed to enhance the knowledge and capacity of Parties, constituted bodies, and other stakeholders for meaningful engagement with indigenous peoples and local communities.  Following the workshop, the CTCN discussed possible areas of collaboration with LCIPP and UNFCCC.

Events. The TEC and CTCN jointly hosted a side event entitled “Technology’s role in constructing more ambitious Nationally Determined Contributions (NDCs),” while the CTCN also participated in a side event hosted by the UNFCCC Means of Implementation division on "Supporting the implementation of technologies through technology needs assessments (TNAs) and NDCs.” The CTCN-UNDP publication “Africa Innovates II” showcasing climate innovators was shared at a closed event of the Africa Group of Countries in advance of the official launch.