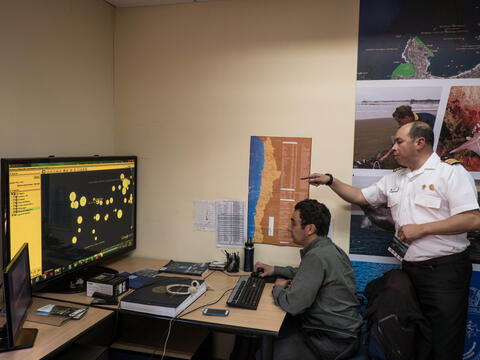 Fish make up 17% of the world’s consumption in Chile, fishing is a vital source of income for communities, including the people of famed Easter Island, or Rapa Nui as it's known by Chileans.

The livelihood of these people is at stake, due to declining populations of marine species who are being impacted by industrial fishers (over fishing and aquarium trade), pollution, and climate change causing habitat loss and environmental damages.

Chile is striving to change this. The creation of a biodiversity monitoring network, in the context of climate change adaptation, was clearly identified as a major need for the environmental institutions of the country.

To protect its biodiversity heritage under global climate change scenarios, Chile wanted to set up a biodiversity monitoring network that spanned the entire country and connected all the entities actively engaging on biodiversity already. To accomplish this feat, they needed a sound technological infrastructure that they did not have the capacity to design. Chile asked the Climate Technology Centre and Network (CTCN) to step in and together they established the Chilean Biodiversity Monitoring Network, an integral component of Chile’s National Climate Change Adaptation Plan.

This network will be used as Chile’s primary instrument in providing reliable data to establish strategies and policies for biodiversity´s conservation and adaptation to climate change. El Roble conservation site is one of the major reservoirs of biodiversity in Chile and soon it will build a biodiversity monitoring station for researchers from the Ministry for the Environment. From research institutions to NGOs, CTCN helped to link these different monitoring entities to come together as a big network under the Chilean Ministry of Environment.