Development of a protocol for the planning, management and implementation of adaptation measures in land use planning at the level of Local Governments
END_OF_DOCUMENT_TOKEN_TO_BE_REPLACED 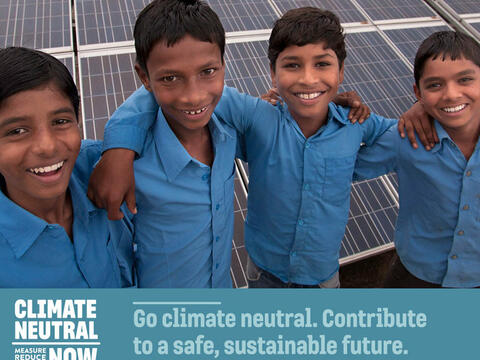 The United Nations (UN) is  calling on businesses and individuals to reduce their climate footprints with the launch of a new initiative, Climate Neutral Now. The world is currently on track to exceed the two degree average warming limit needed to avoid catastrophic climate change. As well as action by governments, voluntary action by business and individuals is needed to ensure we get on track to avoid the worst of climate change and transition to climate neutrality by the second-half of the 21st century.

Climate Neutral Now provides a simple UN certified method for acting, as well as ways to support that action through an online portal.

Christiana Figueres, Executive Secretary of the UN Framework Convention on Climate Change (UNFCCC) said: "Climate neutrality is a long term vision of the world we want this century and backed by science. The new universal agreement to be inked in Paris this December at COP21 needs to be a springboard to that future. It is going to require action today and tomorrow and everyone needs to get on board-- from governments and corporations to cities, regions and individuals".

"I've already pledged to personally become Climate Neutral Now and invite you to join me in measuring, reducing and offsetting your emissions. Over time the need for offsets is going to decline as energy systems become ever more low carbon, healthy ecosystems like forests expand and we arrive at a climate neutral world in the second half of the century. Climate change will affect everyone, yet everyone can effect positive change starting today and beginning now," she added.

The initiative includes a new online platform that anyone can use which makes it easy to quickly select from a range of UN verified emissions reductions for offsetting. It also links to organisations that can provide businesses with climate footprint measurement and reduction advice and support. All of the projects providing offsets through the new online platform contribute to sustainable development in the developing world as well as reducing global emissions.

Actor and Climate Neutral Now supporter Edward Norton said: "We all need to take personal responsibility to combat the threat of climate change. Join me in the Climate Neutral Now initiative to reduce the impact of climate change and offset carbon emissions. Help protect the ecosystems that sustain biodiversity and save the livelihoods of billions of people around the world."

Offsetting is a positive way of reducing global emissions while also benefiting the developing world that complements direct emission reductions. Climate Neutral Now offers Certified Emission Reductions (CERs) which are drawn from the UN Clean Development Mechanism (CDM). The offsets generate revenue for projects and programmes, of which the CDM has more than 7,900 in 107 developing countries.

The verification system that the UN has now put in place ensures that all offsets sold represent genuine emission reductions. Indeed, recent research conducted by Imperial College London shows that every tonne of CO2 offset via the CDM not only funds GHG reductions, but can deliver up to $664 in additional economic, social and environmental benefits. Through the CDM more than 1.6 billion tons of carbon emissions have been avoided globally through carbon offsetting, whilst simultaneously benefiting the developing world.

The role of businesses in tackling climate change has never been more important. As one of the major contributors of carbon emissions, responsible businesses and organisations need to measure, reduce and offset their emissions. Already, the UN has seen a number of high profile businesses including Microsoft, Sony, the adidas Group and Marks & Spencer’s, pledge their support as well as numerous SMEs and business associations.

Rob Bernard, Chief Environmental Strategist, Microsoft Corporation said: "Microsoft believes that companies – and particularly information technology companies - have an important role to play in reducing carbon emissions. In 2012, this belief led our company to set an ambitious goal to be 100 percent carbon neutral. We have accomplished this by boosting efficiencies, investing in renewable energy and funding a carbon offset program. We are supporting Climate Neutral Now because we believe in the power of accountability and have witnessed the transformative nature of carbon offset projects and sustainable community development, particularly in emerging nations."

Climate Neutral Now is part of the UNFCCC and is intended to help more individuals and organisations measure, reduce and offset their climate footprints.

CTCN Keyword Matches:
Ecosystems and biodiversity
Community based
Share this: